I’ve always said “I wouldn’t be here today if it wasn’t for Mama, Jesus and Hunter Trek.”

I picked him out when he was three weeks old.  He had a white squiggly down his back and kept cuddling up to me.  He was the one.  I could hardly wait to pick him up when he was six weeks old.  My then boyfriend surprised me at the time by bringing him home.  Hunter was curled up in a ball in his old pick up truck.  I was smitten.

When that same guy broke my heart a month later I clung to that little beagle and cried so hard and ugly late in to the night.  And he let me.

I would come home from work during lunch to take him out and by golly that dog was excited to see me.  He would wag his tail and fall over his floppy ears and let me cuddle him real tight.  He didn’t realize it, but he was nursing my heart back to health.

Even as a puppy I would see him sitting in the yard, eyes closed, nose raised, smelling the wind as it floated by.  First time I saw him do that I knew he was the dog for me.

Years later, and another failed relationship in the books.  This one more serious.  I had my car packed to the brim and made the difficult decision to leave my then fiancé, a childhood friend.  I was making the 19 hour drive from Orlando to Dallas and Hunter Trek was propped up on a pile of stuff in my car.  I would go from staring dazed out the window to sobbing uncontrollably.  When I would start crying that smellie beagle would sigh, get up from his comfy spot and put his head on my shoulder.  And he would stay there until I stopped crying.  He just let me be, mess and all.

After that break up I entered the darkest phase of my life.  I was confused, hurt, unmedicated bipolar and reeling out of control.  I had an apartment by myself off of Hwy 75.  I worked at a job I hated and came home alone.  But every time I opened that door this little animal greeted me with such genuine pure joy that I felt like I could make it through one more night.

I played mournful songs on my guitar and sang way too loud, but that dog didn’t mind.  He curled up next to me on the couch and let me be.

I would get into rages and scream out of control but Hunter Trek would just stare at me with his big hound dog eyes and bring some sense of reality and substance into my crazy mind.  His presence was calming and he would bring me down.

It wasn’t all bad times with Hunter.  We would go on long, long walks and he would chase squirrels and smell stuff real, real good.  We would go for long drives and he would stick his floppy ears out the window and let them blow in the wind.  Our car would pull up to the most intense looking person and the moment they saw Hunter they would break into the biggest smile.  Funny how dogs can do that.

Funny how dogs can do all of this.  Make you feel less alone.  Make you feel extreme joy.  Give you the encouragement to get through one more day.  Give you something to pour your love in to.  Unhindered.  The relationship between man and dog is so unique.

Hunter has been moving slower for a while, the last few weeks he’s stopped eating as much and for a beagle that’s saying something.  I just found out that he has extreme fast acting cancer.  It’s in most of his torso.  I can’t put this feeling into words, this conscious decision to let go of my friend that I’ve had for 13 years.  I can let him die painfully or ease his passing.  I feel like this is death in a microcosm.  A lifelong relationship in fast motion.  I can’t, don’t want to, am not able to let him go.  But I must.

Hound dogs have a certain smell to them.  Like, it’s very strong.  If it’s not your dog, it’s probably the most disgusting smell in the world.  But man oh man, I will miss burying my face in Hunter Trek’s face, breathing deep and feeling a sense of ease.  A sense of home.

That dog has been there for me in times of crisis.  In times of pure bliss.  In the everyday moments.  I feel like it’s the passing of an era.  The passing of so much of my darkness, codependency, extremes.  But that is not what I’m going to remember of Hunter Trek.  I’m going to remember our cuddle sessions, his smell, our walks, him sniffing the wind, his bay, his tail wag, his floppy ears…

So here’s to confronting pain, moving on, remembering the good stuff and letting go.

5 thoughts on “Ode to Hunter Trek” 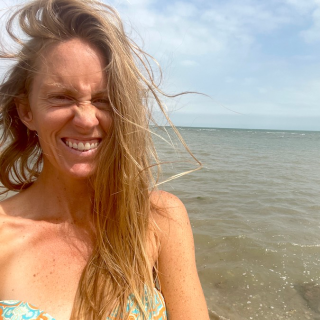 Hi Friends! In my years of wandering to find balance, I have swung from one extreme to another, fighting my way through substance abuse, eating disorders, sexual misadventures, rage, depression, & shame. I've learned some coping tools along the way that I would love to share with you. And I've got quite a few crazy stories.

“I need a drink.”
How to know when you’re a Puppy Foster Parent Fail:
We’re making a very special delivery to a friend in Wyoming.
To those “Making Memories”:
In our years of travel, the concept of Home has morphed & expanded.
“If I could make a livin' out of lovin' you,